Fox, Rocky, and I stayed at Big Lake for breakfast the next morning then headed out. The day was filled with forest then more forest. For variety, nature provided us with dead forest to hike through for a bit. The burned areas were due to different fires because in some parts there was nothing on the ground and it looked post apocalyptic, but in other areas there were young trees as high as my shoulder.

In the morning I passed mile 2000!! But there was no marker like at 1000. I guess I’m not the only one getting tired. But with only 650 miles to go, I started feeling like the end was in sight.
I was a few minutes behind Fox and Rocky when I came around a corner and smelled fire. And not just a campfire, a forest fire. I saw the guys stopped on the trail with another hiker, looking into the burned trees. When I approached, Rocky pointed out some flames in the woods: some of the trees were on fire! 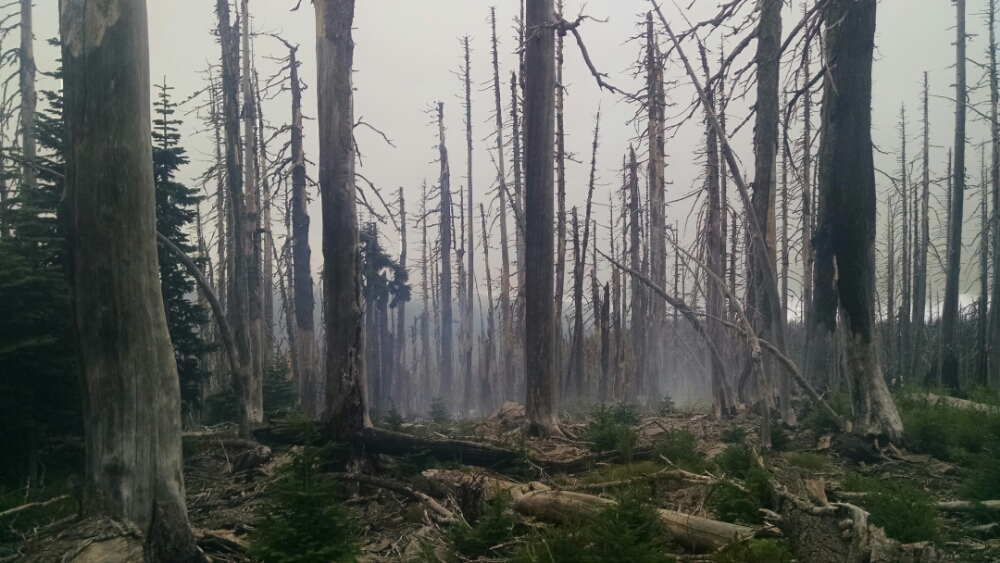 That’s not fog in the picture above, it is smoke. Rocky, the other hiker and I took our extra water and went to try to put the small fires out. Fox, meanwhile, posted about it on Facebook. We extinguished several patches of flames but couldn’t reach the ones high off the ground. Then we heard some creaking and crackling and realized that we were not in the safest place. We retreated to the trail where we saw in the sand a message stating that another hiker called 911. Fox tried to call the forest service but only left a message. However, we felt confident that some authority knew of the fire so we hiked on.
It got really foggy in the late afternoon and felt a lot later in the day than it actually was. We went through a fairly long section where there was no water and had to refill at a lake instead of a river, but that’s what you have to do sometimes. Because of our late start, we “only” hiked 28.4 miles that days and camped in a nice clearing just after Shale Lake.